In 1962 the modern Journalism Building was opened.

The department‵s publications in history. 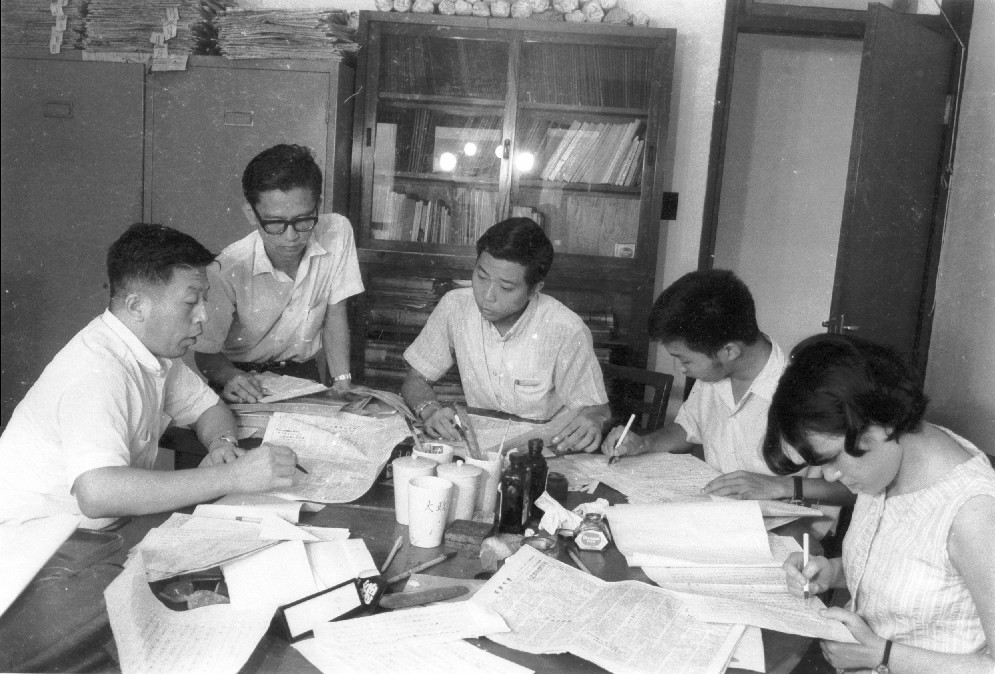 1969, students were learning news editing under the instruction of Prof. Chao Ying. 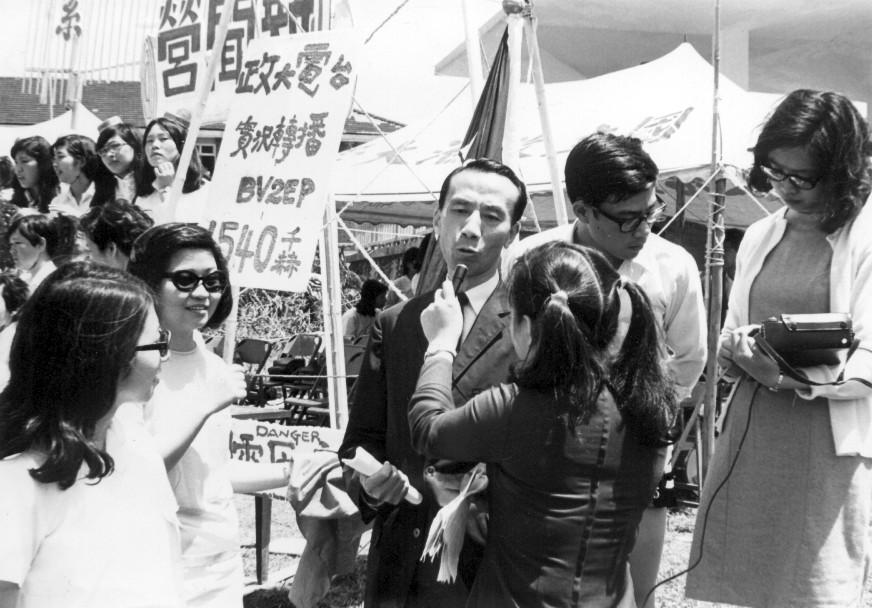 Live radio broadcasting for the 1970 anniversary celebrations of the University.

The Department has been established more than 80 years ago and is a leading domestic institution in the field of communication in Taiwan. Its history can be divided into four periods.

I. Enduring Times of Conflict

In 1935, National Chengchi University (NCCU), which was known as Central Chengchi Institute at that time established the Department of Journalism. Cheng Tien-fang (程天放) was the first Chair, followed by Ma Hsing-yeh (馬星野), a returned graduate from the University of Missouri journalism department. This takes us to 1949, when the government of the Republic of China moved to Taiwan. During those turbulent times, to express their support for the country, students and alumni of the Department started the intern publication “Sino-Foreign Monthly.” Its vibrant and complex contents with international perspectives received widespread attention. Mr. Ma Hsing-yeh, during that period, wrote the Department's song to enshrine these noble ideals for journalists: “The fire of justice ignites people's hearts, the world liberty bell rings loudly.” For that reason, the Department has nurtured many famous figures in the history of journalism, such as China's first female journalist Ms. Hsu Chung-pei (徐鍾珮), journalism educator Mr. Wang Hung-chun (王洪鈞), and leading communication researcher Mr. Hsu Chia-shih (徐佳士).

II. Guiding an Eternal Flame Past the Mountains

The second phase of the Department's development started with NCCU's reestablishment in Muzha (Mucha) of Taipei in Taiwan in 1954 to the 1960s. The Graduate Institute of Journalism, under Mr. Tseng Hsu-bai's (曾虛白) leadership, and three other institutes started to admit Master of Arts (MA) students. The undergraduate department was restored in the following year, with publisher of the New Life Daily (新生報) Hsieh Jan-chih (謝然之) put in charge. During that period, the country was facing domestic political difficulties and resource shortages, making it very difficult to cultivate talent in higher education. But this tough study environment bred perseverance and a spirit of hard working that would serve as a backbone for the generation. Exemplary graduates include former Director of the Graduate Institute of Journalism Prof. Lee Chan (李瞻), renowned media executive Mr. Shih Yung-kuei (石永貴), former Dean of the College of Communication Dean Prof. Pan Jia-ching (潘家慶), former Chair of the Department Prof. Lai Kuang-lin (賴光臨), and former President of the United Daily News (聯合報) Mr. Chang Jhuo-chin (張作錦). All of them have made contributions to the development of media and journalism.

After the tumultuous 1950s, as the domestic political situation stabilized and economic strength picked up, the Department gradually stepped out of its earlier difficulties. In the early 1960s its modern Journalism Building was opened and has since been a source of public pride in terms of improved facilities and the quality of teaching, leading thereby to a golden age of journalism education in Taiwan. Journalists at that time not only enriched their knowledge, but they also came out on top in many sports competitions, showing in full that news people had plenty of energy and diverse creative talents. That tradition has continued through today as a hallmark of the Department.

III. Rising from Chaos to Stability

In the 1970s, the country faced rejection from the United Nations and was trapped in a period of lonely isolation without international support. Domestic public anger boiled against these conditions, uniting people from every strata of the society into a united protest. Whether defending a claim to the Tiaoyutai Islands (釣魚台列島) or voicing protest against the United States ambassador, NCCU journalism students could be seen. Until today, students and graduates have cared about the country's current events and spoken up for the interests of national progress, which is still the duty and mission of journalists.

As domestic basic infrastructure was gradually completed and the economic strength reentered the world’s embrace, the Department also stabilized. In 1981, the Department completed equipping the NT$10 million studio, the largest in Southeast Asia for teaching broadcast and television productions. This studio has since inspired graduates of the Department to branch out into the electronic media field. In addition, the Department recruited teachers who returned as scholars from overseas. Among them were Cloud Gate Dance Theatre (雲門舞集) founder Mr. Lin Hwai-min (林懷民) and CommonWealth Magazine (天下雜誌) publisher Ms. Yin Yun-peng (殷允芃). They brought brand new, open horizons and energy, which would then become the traditions of the Department.

IV. Toward a New Era of Communication